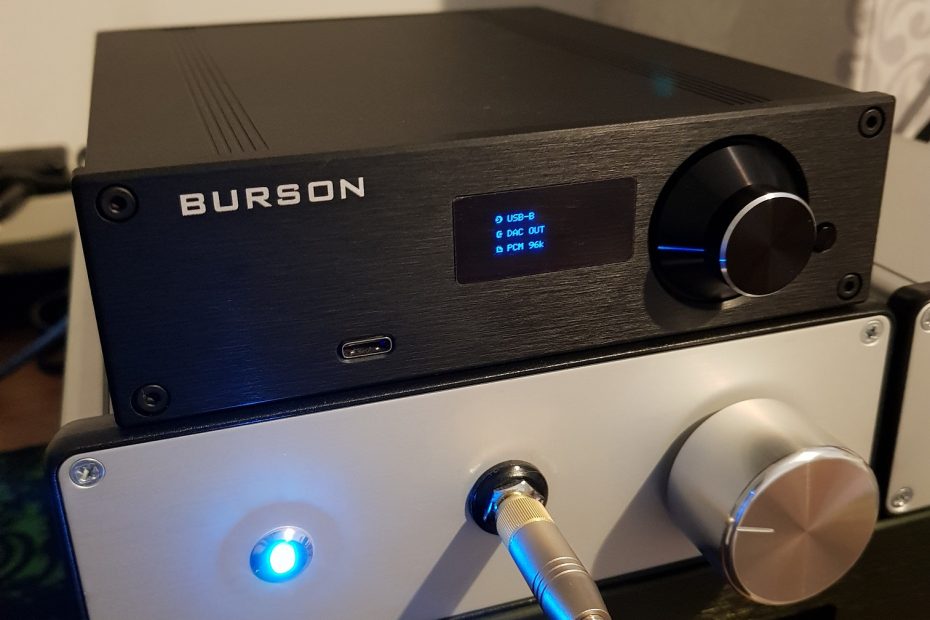 Firstly I would like to thank Charles at Burson Audio for providing me with the Burson Swing DAC for the purpose of this review.

After using this DAC for around a week, I have found it has been nothing short of an impressive experience. This is the basic version so it uses 2x NE5532 (dual) OP Amps in the I/V stage and 2x NE5534 (single) OP Amps in the LP stage. Even with these standard monolithic IC OP Amps, the Swing produces a pleasant, clean, detailed and neutral sound experience.

As with previous reviews, I like to use a standard test setup. I tend to lean more towards using my Whammy rather than the NuHybrid as its more neutral sounding being a solid state headphone amp so I use it as a reference. I will also be using the HiFiMan HE400i headphones as in previous reviews.

The tracks I will be using for testing:

In a strong well presented box contains the Burson Swing DAC surrounded by foam padding to prevent knocks and bumps in transit. A plethora of accessories can be found in the two additional boxes packed down the sides of the DAC. As this is the basic version the optional remote control is NOT included unfortunately.

As the Swing allows to be installed inside a PC 5.25″ bay, there are accessories included for it to be powered and connected internally. The Swing also comes with a backplate to make one of the outputs accessible for connecting a headphone amp or active speakers for example.

The Swing is housed in a black anodized aluminium enclosure with a thick front panel in brushed aluminium. Looking at this device, its aesthetically pleasing and has real premium feel to it right down to the volume knob and the menu button which are also made of aluminium. In the future it would be nice to see a silver anodized version.

On the back of the Swing you will find plenty of connectivity options with provisions for USB, coaxial and optical inputs, a standard barrel jack connector for the power if using standalone, a molex power connector for connecting internally to a PC’s power supply and then there are the DAC out which is a line level output and a pre-amp output where the volume can be controlled from the DAC. There is also the rare option of a microphone input which is a nice addition and something you dont usually find on DAC’s.

The Swing also boasts USB type C support on the front panel which supports USB-OTG devices such as Android smartphones or DAP’s.

Another distictive feature of the Swing is that it features Burson’s MCPS (Max Current Power Supply). More information about that can be found here.

The front panel has a dedicated menu button to access settings for the 7 built-in filters, gain settings and audio source settings plus the option to turn emphasis on or off which is recommended to be kept turned off.

One little niggle I have is the icon for the audio bit-rate flickers which is no big deal but would be nice to see fixed in a firmware update. Also it would have been nice to see additional options to set the screen to timeout like on the Topping D50 but again its definitely not a deal breaker.

Burson Audio also stands by the quality of their workmanship by offering a whopping 5 year warranty where most manufacturers only offer 1 or 2 years.

Even with the standard OP Amps installed the Swing is really detailed sounding. Compared to the Topping D50 the very slight distortion on certain high notes with some instruments is no longer there which I put down to the MCPS inside which effectively filters out the 50-60Hz noise by shifting the frequency to 170KHz making it inaudible to our ears. This means by using a standard switching power supply the Swing is dead quiet.

OP Amp rolling also plays a major part in the design of the Swing and as impressed as I am even with the standard OP Amps, I think this unit will really shine with either the V6 Classic’s or V6 Vivids installed and would take this DAC to a whole new level.

Okay so listening to my test tracks, I find the audio to be very clean sounding, not too analytical but clear, concise, maybe the mids and treble is a little warm on some tracks but in a good way. This is probably down to the standard IC OP Amps that are installed.

Overall, the sound seems very detailed and mostly neutral and I can certainly pick out extra details in my tracks that I certainly did not notice before.

So if you are looking for a DAC that you could use to upgrade the soundcard in your PC or you simply want it for your desktop to complement your speakers or a headphone amp then I can easily recommend the Burson Swing. Its a little pricier than the Topping D50 but taking into account the flexibility of the Swing like the ability to roll OP Amps and connect your smartphone then the difference in price is certainly worth it.

For more information about this product and other products please visit https://www.bursonaudio.com