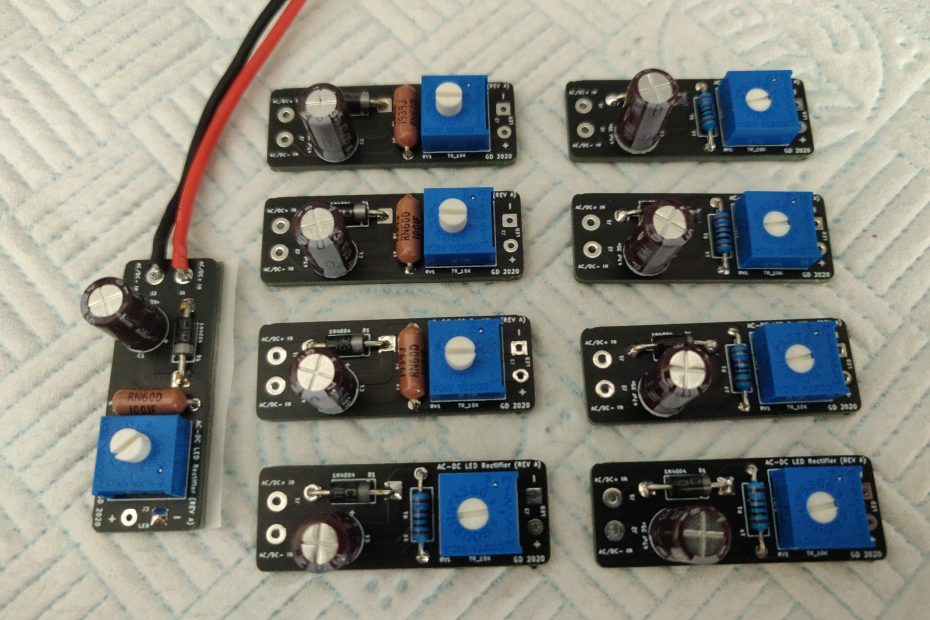 A while ago I found a circuit on the internet that would be useful for adding LED power indicators to devices to show they are powered up and switched on. When I built the Whammy headphone amp, there was no provision for soldering an LED power indicator when building the project into an enclosure which made it look a bit bare but also prevented us from seeing if the headphone amp was switched on or not.

This is where the LED rectifier circuit comes in handy. As it accepts a low voltage AC or DC current you can tap into a suitable point on the PCB of the device or on the transformers secondary outputs where you want to add the LED indicator to so when you power up the device the LED will glow which is great because it is not only informative but more aesthetically pleasing too.

The design is a simple half wave rectifier consisting of just one rectifier diode rated at 400v/1A to rectify the current from AC to DC, a 47uf/35v capacitor to smooth the current and prevent LED flicker and a 1K resistor to limit the current through the LED. I also added a 10K trim pot to allow the LED brightness to be adjusted on the fly in the case you’re LED is too bright or dazzling.

I actually doubled up on my order since my first lot of parts were delayed in shipping so I ended up building more than I needed. I wanted two of these anyway to install into existing headphone amp builds so any I don’t need I will make available for anyone that can make use of them. As you can see, the board is very simple only requiring four components so the build time is relatively quick. I built a bunch of these in under an hour.

The following components can be ordered from DigiKey:

Drop an email to contact@audiosy.net if you are interested in obtaining one or more boards for your use.

Disclaimer:
The boards are provided as is without warranty of any kind. They are intended solely for personal use and are supplied as a bare board only which is classed as an unfinished product. While every effort has been made to ensure the board has been designed with industry standards in mind, it may not depict an exact representation of these standards and as such there may be minor inconsistencies or oversights in the design process. While these boards have been extensively tested, there can be no guarantees whatsoever that the board is completely free of defects and as such caution and due diligence should be taken at all times when assembling and using the board.